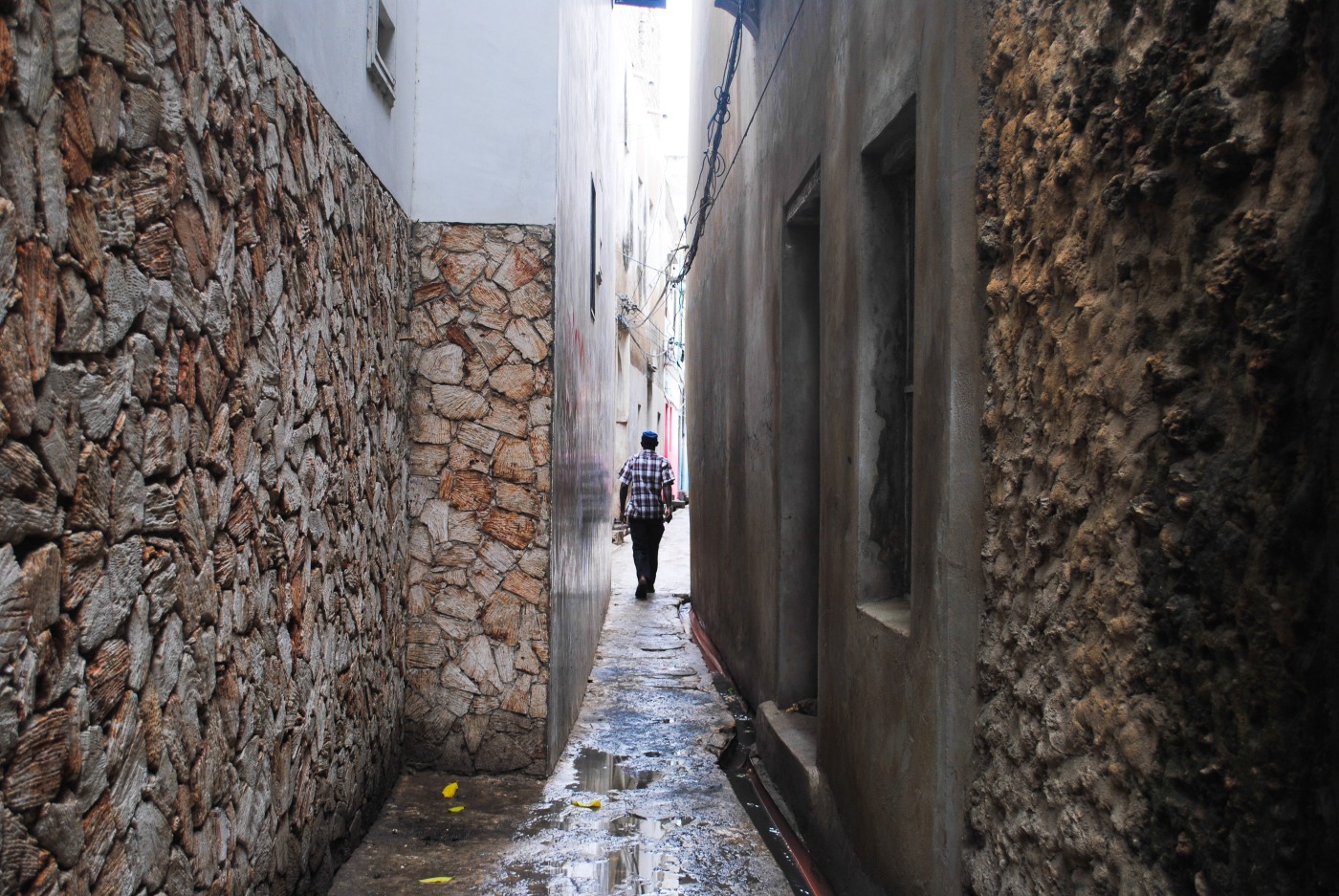 When planning my trip down to Lamu, I scourged the internet for articles and vlogs published by fellow wanderlusters with recommendations on interesting sites to visit. Top on that list were visiting Takwa ruins and going for a slow sunset sail. But things don’t always work as planned, do they? The weather was moody; the sea was rough and our scaredy-cat selves couldn’t muster the courage to be on a (flimsy) water vessel with all that wind. You see, there’s the certainty aspect of death, which is a given; but accelerating yours is another case. We were not about to do this to ourselves. (Is my cowardice showing?)

Armed with our Nikons, we decided to hit the narrow maze-like streets of Lamu  to try and explore the everyday life of its people. Being an Island, everything gets in via speed boats or dhows and is then transported by donkeys back to shops, markets and homes.  Donkeys are quite a common site here and you will see even young boys riding them. 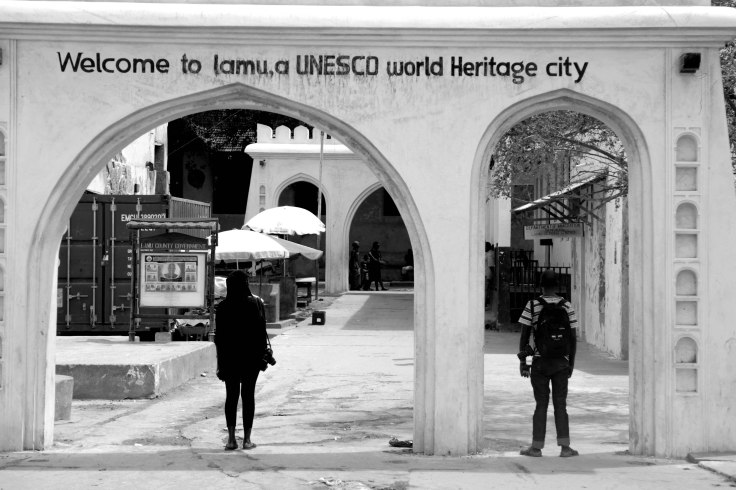 Stepping into Lamu Town feels like taking a step back into history. Time slows down and you can easily picture the Arab, Persian and Chinese traders docking at the port; resting their  ships before proceeding on their trade routes.  The choral and stone buildings with their intricately curved doors and wooden windows still stand proudly; defying the test of age and time.  Because of its rich history and well preserved culture and traits; the town was declared a UNESCO World Heritage Centre in 2001.

The Architecture of Lamu Town (Now and Then)

The buildings of Lamu carry the history of yore; having heavy influences of mostly Arabic, Indian, Persian architecture.   The predominant construction material is coral stone and timber (mostly mangrove poles). In the old days, carved timber doors were a sign of wealth; the more intricate and flamboyant the pattern was; the wealthier a person was considered. As such, you will find most building adorned with beautifully carved doors; each signifying the economic status of its owner.

Little has changed over the years; streets are very narrow, buildings are roughly a meter apart. The open drainage system is still predominant; and unlike Shela town which is much cleaner; Lamu town can be quite murky.  Electricity wires criss-cross above; connecting the town to the national grid. 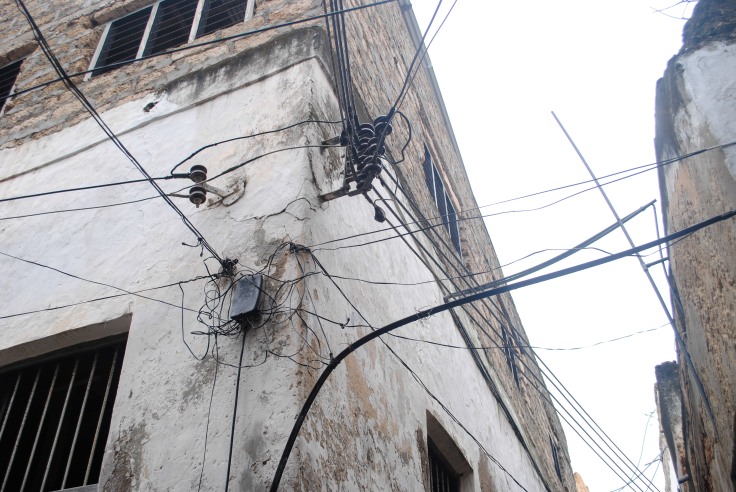 Newer buildings within the town have wider staircases; larger windows and tend to be more spacious and well ventilated compared to their older counterparts. 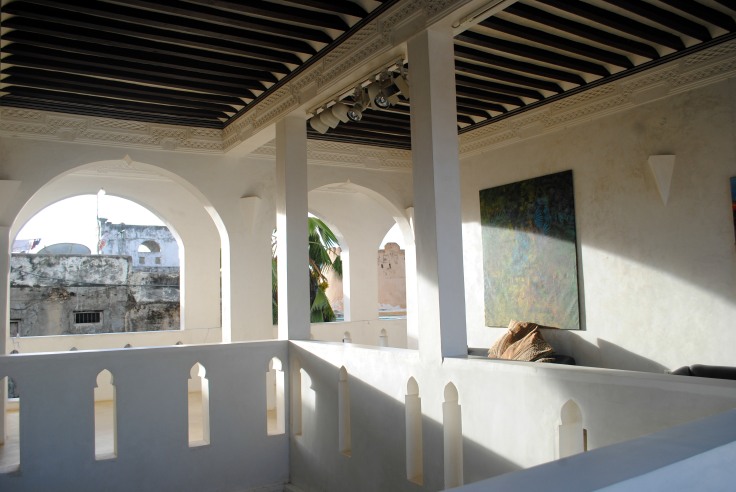 Typical as with most Swahili towns along the Kenyan Coast, the street food culture in Lamu is quite vibrant. You can find snacks being sold freely on the streets (especially early in the morning and in the evening after 4pm).  I wrote about the street food in Lamu here.

Marinated meats are grilled on skewers atop charcoal stoves and emanate delicious aromas. Fresh sea food is available very affordably as the main source of income for most of the local men is fishing.  There is a fish market that opens at 8am and closes by 11pm.  Lamu town has one fresh produce market that is open the entire day. Read more on the foods to try out in Lamu in this post.

A lot of people in Lamu town are of mixed blood; coming from a line of Omani and Arab intermarriages with the local Mijikendas.  The Bajuni community are predominant; but the town has evolved into a more cosmopolitan place accommodating quite an assortment of tribes from the rest of Kenya.

There’s a common thing that you will experience with the people of Lamu; their hospitality and friendliness.  People here are so warm and kind; sort of reminds you how humanity should be like.

When visiting the Lamu museum, I advise you take several hours off your schedule so as to be able to read through the texts (They however need to employ a copywriter because, typos). The museum documents literally everything you need to learn about Lamu town; from its history, people, culture, religion and ceremonies.

The Cats of Lamu

There are so many cats on the streets of Lamu town.  Apparently, these cats trace their ancestry to the cats that were first domesticated in Egypt some  4000 years back. There’s even a whole book titled “The Cats of Lamu” that’s been written about them. 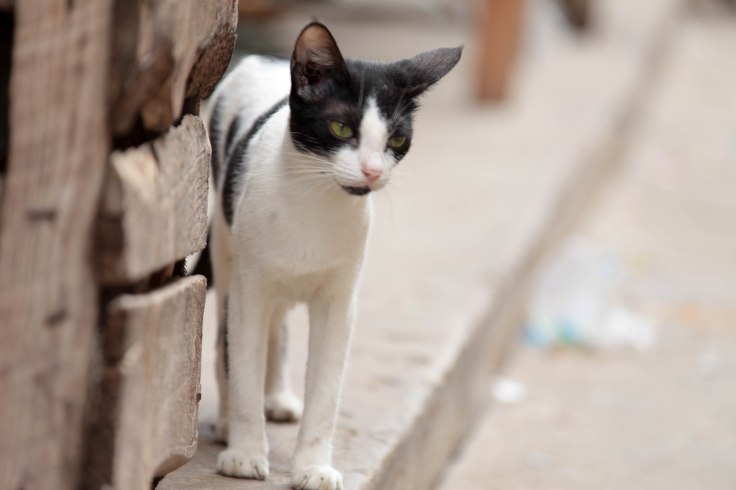 Of Boats and Captains with  interesting names

Boats in Lamu have such interesting names; from pop celebrities, to movie  titles to politicians and current affairs. The names of the captains driving the motor boats are even more interesting. My most memorable was Captain Born Ready 🙂

Lamu is one of those that will have you forget the stress that comes with living in a fast paced city. You will learn a lot, especially with regards to the architecture and culture of  its people from days long gone.  Be sure to plan your holiday with the weather seasons in mind; otherwise you might be stuck indoors if you aren’t careful.